Based in the wild and unspoiled island state of Tasmania at the southernmost tip of Australia, Van Diemen’s Band gave its debut performances in March 2017 as part of the Ten Days on the Island Festival, presenting a program of Neapolitan music by Fiorenza, Geminiani and the Scarlatti family.

VDB is made up of some of the nation’s most highly respected early music specialists who, between them, have many decades of experience with some of the finest ensembles in Europe and Australia. With a passion for excellence together with integrity of musicological research, VDB strives to share this expertise by presenting its discoveries in exciting and accessible concerts in interesting and unconventional venues.

A flexible ensemble, VDB can vary in size from an intimate chamber group to a larger mid-eighteenth-century orchestra. Working with regular guest directors, VDB explores the creativity and freedom of expression in music of the baroque while deferring to historical sources on style and instrumentation.

Seeing the vital importance of education, VDB has a mission to train the next generation of Tasmanian and national musicians through workshops and an ‘academy’-style teaching program that culminates in professional playing opportunities.

Van Diemen’s Band’s debut CD ‘Cello Napoletano’ for ABC Classics was released in Australia in October 2017, and in the UK/Europe in 2018. 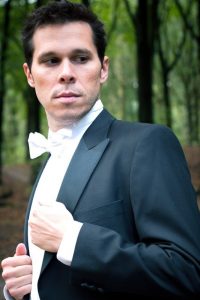 Born in Australia, David Greco has worked on the cutting edge of the early music movement in Europe, performing with ensembles such as the Amsterdam Baroque Orchestra under Ton Koopman, the Freiburger Barockorchester and the Netherlands Bach Society. He has sung in some of the world’s finest concert halls, from the Theatre des Champs-Elyséto the Royal Concertgebouw in Amsterdam,and appeared as a soloist at the world’s most exciting festivals, in productions such as Gluck’s Alceste in the Aix-en-Provence Festival and Purcell’s The Fairy Queen for Glyndebourne Festival Opera.

David has sung as a Lay Clark in the Westminster Abbey Choir, and in 2014 was appointed to a position with the Sistine Chapel Choir in the Vatican.

The 2016 season saw David’s debut as a principal artist with Opera Australia in The Love for Three Oranges and The Eighth Wonder. He performed the role of Wagner in Gounod’s Faust in a co-production with Lyric Opera Chicago and the Macau International Music Festival.

In 2017 he was a soloist for the Australian Brandenburg Orchestra’s tour of Handel’s Messiah and performed Bach’s cantata Ich habe genug in Helpmann Award-winning concerts with the Sydney Symphony Orchestra, as well as featuring in performances of Messiah and Bach’sSt Matthew Passion for Sydney Philharmonia Choirs. He also appeared as Seneca in Pinchgut Opera’s production of The Coronation of Poppeaand in the title role in Monteverdi’s L’Orfeo with the Melbourne Conservatorium of Music under Erin Helyard.

Engagements in 2018 include the role of Abner in Handel’s Athalia for Pinchgut Opera, a program with the Australian Haydn Ensemble featuring the orchestrated songs of Schubert, and concerts with Latitude 37.

David has an impressive catalogue of solo recordings spread across a variety of recording labels, including Poems of Love and War, featuring arias by New Zealand composer Jack Body, on the Naxos Label, and a recently released Winterreise with Erin Helyard on period instruments on the ABC Classics label.

Historical flautist Georgia Browne has an international profile as a soloist, chamber musician and orchestral player. She is currently first flute of the French group Ensemble Pygmalion with whom she has had onstage solos at the Opera Comique in Paris and the Aix-en-Provence opera festival. In the UK she regularly appears in concert with The Dunedin Consort, The English Concert, Arcangelo, La Nuova Musica and the Orchestra of the Age of Enlightenment. Invitations from further afield include guest appearances with the Australian Chamber Orchestra, the Australian Romantic Classical Orchestra, Latitude 37 and Capella Cracoviensis as well as concerto performances with European and Australian ensembles. Her album of flute music by Carl Friedrich Abel is one of a number of recordings she has featured on. Georgia has given masterclasses and lectures at numerous institutions in the UK, Iceland, Asia and Australia.

Harpsichordist Tom Foster combines his role of principal keyboardist of the English Concert with solo recitals and chamber music collaborations in the UK and on the continent. In 2020 Tom will perform solo at Carnegie Hall in New York City with a recital of works by Muffat, Froberger and Handel. As an orchestral continuo player Tom has performed with the Scottish Ensemble, Dunedin Consort, Arcangelo, Britten Sinfonia, the BBC Singers, the Orchestra of the Age of Enlightenment and the Mahler Chamber Orchestra. He has been engaged as an assistant conductor for opera productions at Iford, Buxton and Garsington and directed the music for the inaugural play at the Sam Wanamaker Theatre in London. Tom holds a first-class degree in Music from St. Catherine’s College, Oxford and gained a Distinction in Performance from the Royal Academy of Music under the guidance of Trevor Pinnock.