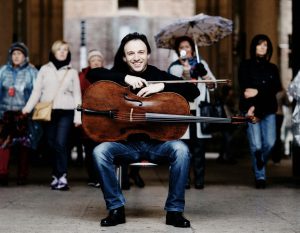 Born in Turin, Italy, Umberto began studying cello at the age of 5, continuing later at the Conservatoire of Music in Turin. Clerici mastered his art with Mario Brunello and David Géringas, both of whom opened to him new musical dimensions of fantasy and rigour.

At the age of 19 he won the Italian Regional Orchestras contest, and began his career as a soloist. Other international prizes followed: the Janigro Competition in Zagreb and the 2011 International Tchaikovsy Competition (the only Italian cellist in the history of that competition, other than Mario Brunello, to be a Prize winner).

Clerici has played as a soloist all over the world including, among many, the Saint Petersburg Philharmonic, the Moscow Russian State Orchestra, the Philharmonia Wien, the Zagreb Philharmonic, Rome, Milano and Florence Orchestras. He has performed in the prestigious concert halls of Carnegie Hall, the Musikverein in Vienna, the Great Shostakovich Hall in Saint Petersburg and the Parco della Musica Auditorium in Rome. In 2012 he also played Tchaikovsky’s Variations on a Rococo theme with the Turin Teatro Regio Orchestra, conducted by Valery Gergiev.

While his solo concerts increased in number, Clerici maintained his chamber music and teaching, finding that these gave him even greater satisfaction than pure performance. At the age of 23 he became assistant Professor at the Salzburg’s Mozarteum Summer Academy.

In 2014 Clerici was appointed principal cello of the Sydney Symphony Orchestra (SSO) and Cello Lecturer at the Sydney University. He made his debut as a soloist with SSO in 2017 with his interdisciplinary project centred on Strauss’ Don Quixote.

He recorded concertos, solo and chamber music and, in 2017, he is realising 2 new solo recordings with ABC Classic.

Umberto plays a 1722 Matteo Goffriller from Venice and a 1758 Carlo Antonio Testore from Milan.